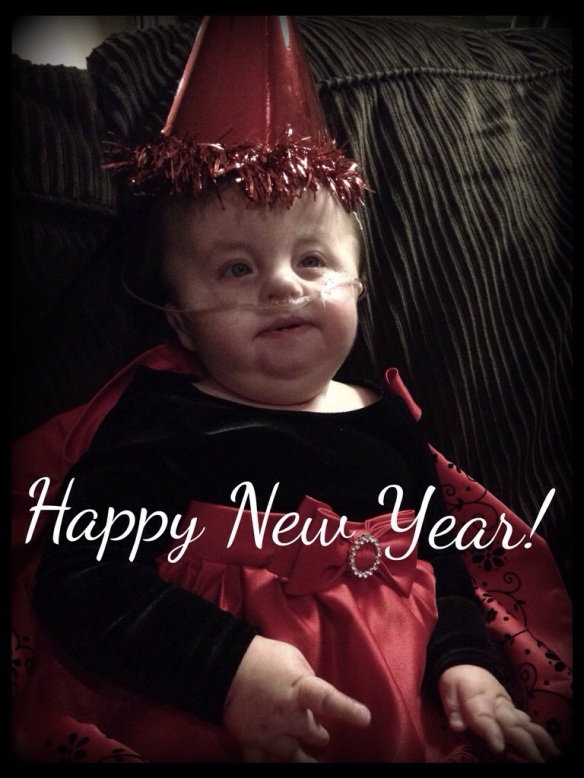 It’s so hard to believe that another year has passed. Looking back, it all seems like such a blur and went by way too fast. In many regards Nora is still my “tiny little infant”. Because she is developmentally delayed it seems as though time should be delayed right along with her, and it’s not. It’s crazy to think that by the time Gavin was her age, I was already 6 months pregnant with Greta!

I’m making a New Year’s resolution to update more frequently. I have no idea where my time and energy have gone, but I vow to get them back! With that said, I rewind back to Christmas ~

I wish I could send a card out to each and every one of you, and if you usually get one and didn’t, I apologize. Or if you accidentally got two or more… I’m sorry! The materialization of the creativity process was delayed. Production was hampered while I tried in vain to find iridescent cardstock. Forced to settle on plain old white cardstock, I resorted to doing an overspray of white iridescent acrylic paint on each one for the snowy effect (not because I like making work for myself, but because I really enjoy and appreciate attention to detail). Since I was unable to send out cards last year, my list of addresses was terribly disorganized and outdated. I made several trips to the post office and lost track of who got what. Now I have a whole year to get that whole thing all figured out… just as I did last year… 😬… and the year before… So I will probably just link this upcoming year’s Christmas card debacle to this post and you can read this same song and dance again.

Did Nora really make her own snow angel?

Unfortunately she did not, and neither did Gavin or Greta. While standing on the ottoman in the comforts of a warm living room I took pictures of each of the kids dressed in full snow gear and forced smiles — reluctantly making “carpet angels”. Photoshop did the rest!

There was one shot of Nora that I could not resist. She can’t just settle for making snow angels! She’s going snowboarding!!! 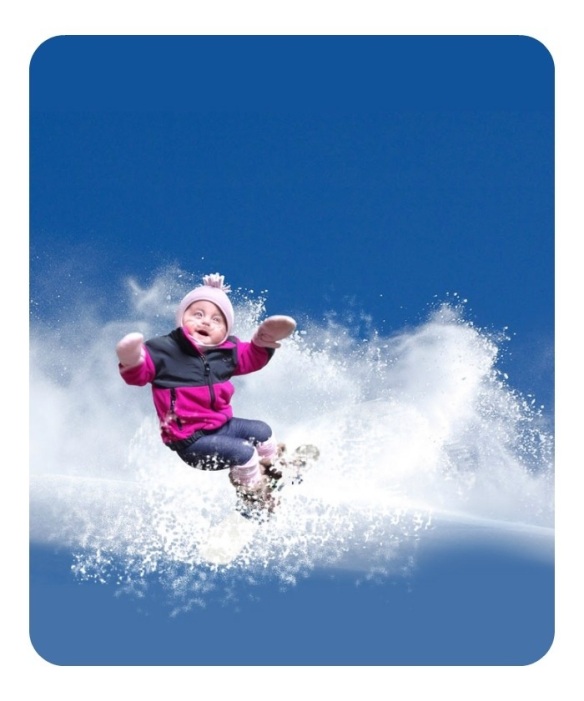 I can do all this through him who gives me strength.
(Philippians 4:13)

Obviously Nora hadn’t really been out snowboarding, but this image personifies Nora’s habit of defeating the “impossible”. Incompatible with life? Watch this!

We had Christmas Eve here at our house with just my parents, my Oma and my brotherz. After a completely utterly chaotic day of cleaning, organizing, baking and cooking, undelivered medicine, and a trip to the pediatrician for an earache (Greta) – the evening was surprisingly and pleasantly put together! God certainly intervened and helped pull some serious strings to get Nora’s medicine that was supposed to have arrived that morning. Had not all the right people been in the right place at the right time – literally down to the second, Nora would have had to wait until after Christmas for her medicine. Lesson learned not to trust pharmacies to smoothly transfer prescriptions. {It is a specialty medication that has to come from a compounding pharmacy somewhere in Timbuktu(?) because of insurance reasons} Thank You, God! 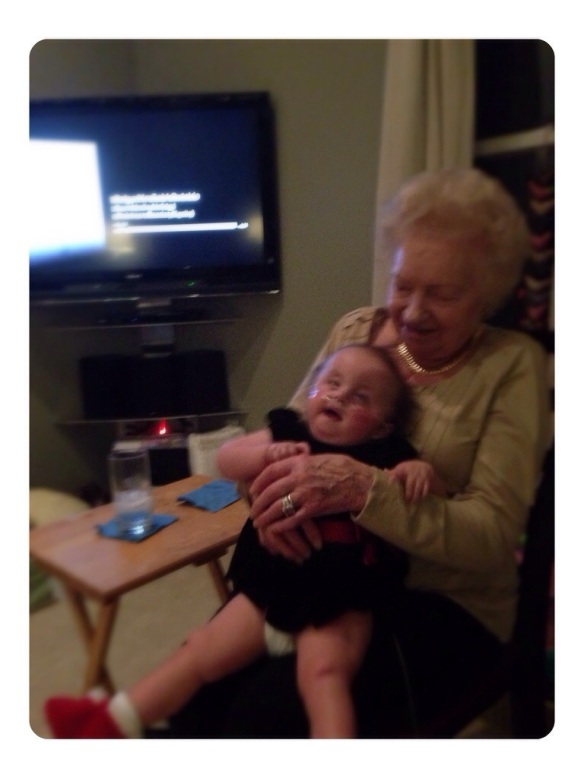 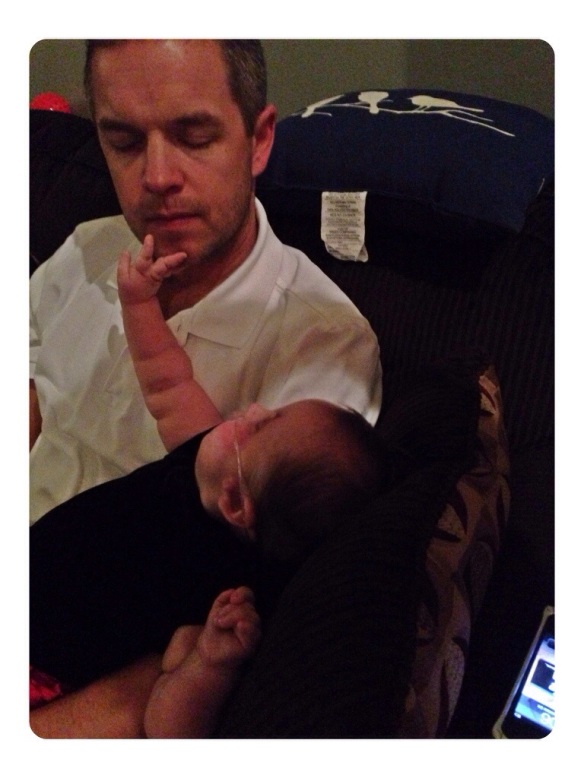 The Big Kids were up early, but not exceedingly so as in years past. They schemed and scammed for hours to get the green light to open presents. They were told they had to wait for Norns to wake up. Of course Nornor indulged in a lengthy sleep-in session and didn’t wake up until almost 10. 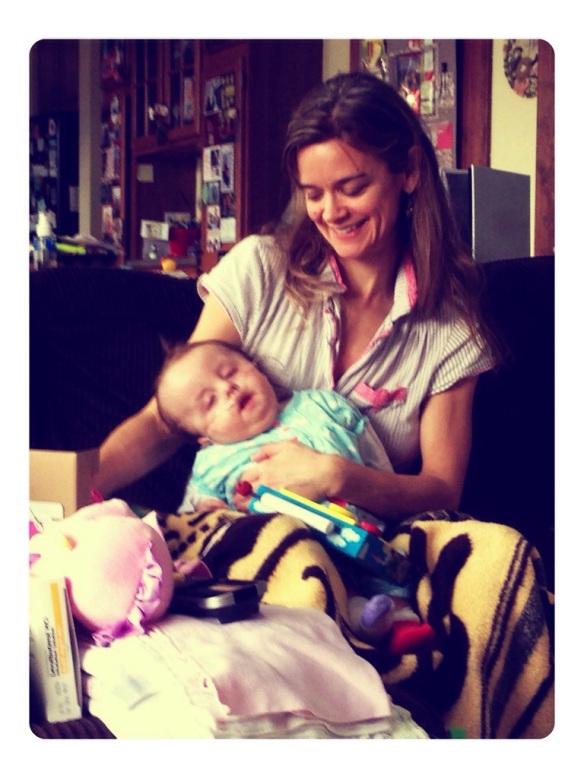 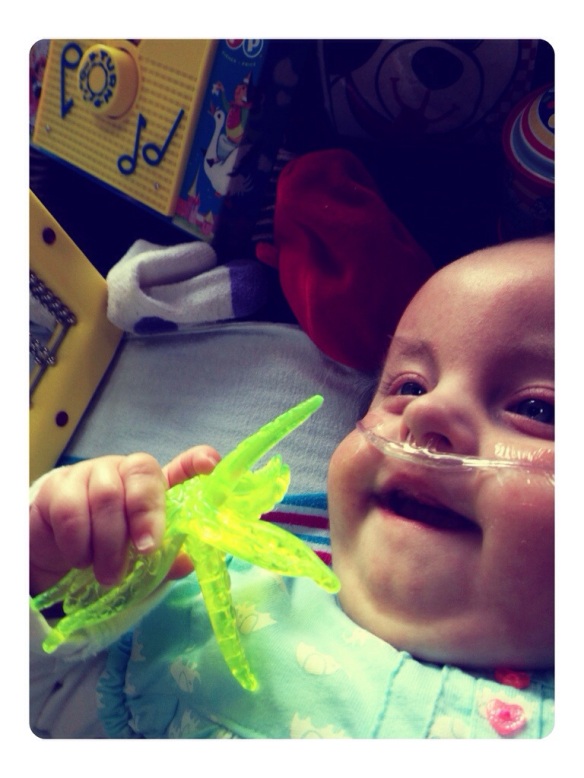 “Catch a falling star and put it in… yer mouf.” 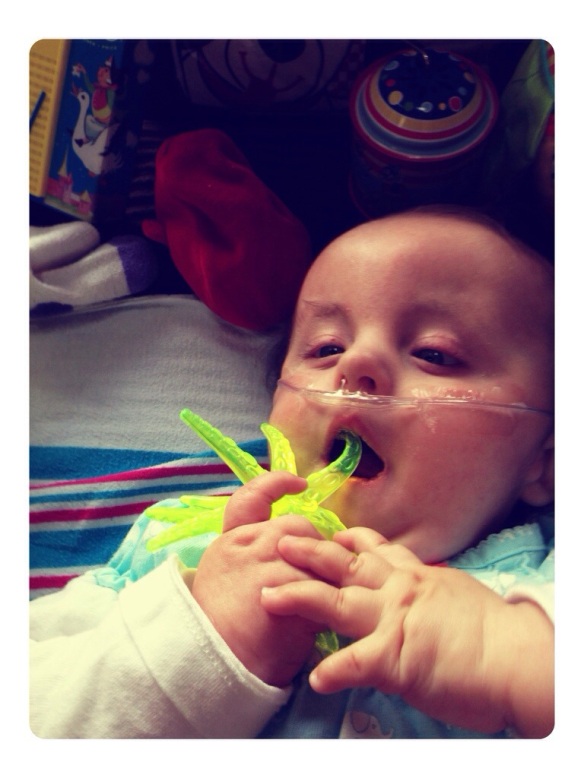 Over the river and through the woods to Nana & Papa’s house we go! Nana had the house decorated so beautifully, as always! Nora looked like a Christmas princess in her pretty gown ~ 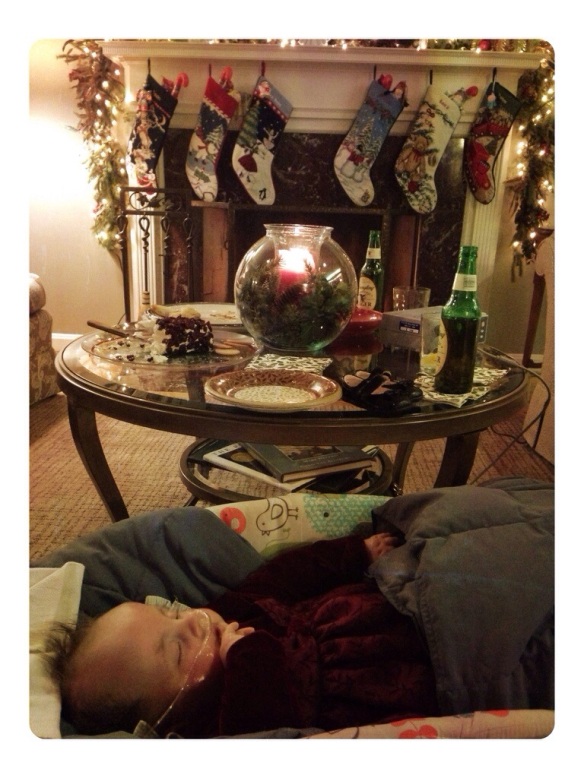 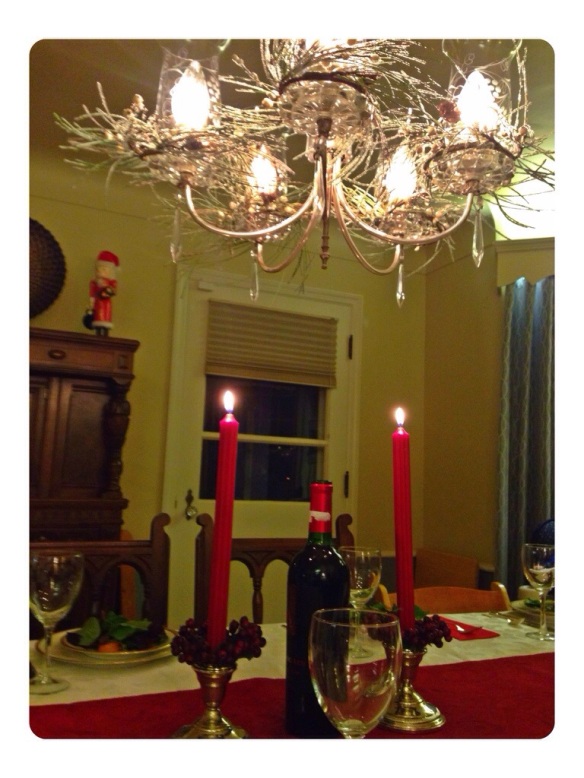 Nornor playing with one of the presents Santa gave her. His name is Piggy Smalls II ~ 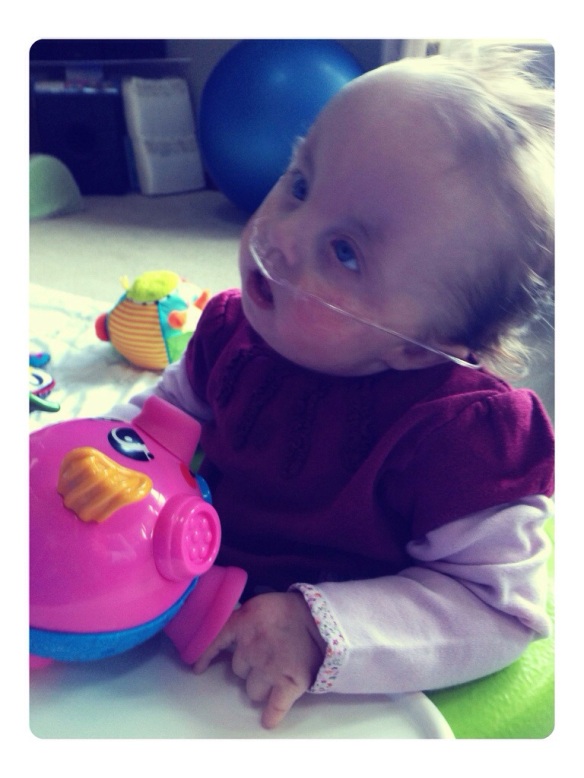 Heart-shaped lint in the laundry room ~

By Thursday Nora’s cold either got worse or she got another cold on top of the one she was getting rid of. {Can that even happen?} Her oxygen sats were dipping pretty low because she couldn’t breathe through her nose. This face mask positioned the O2ube in front of her mouth and solved that problem. Poor girl. 😦 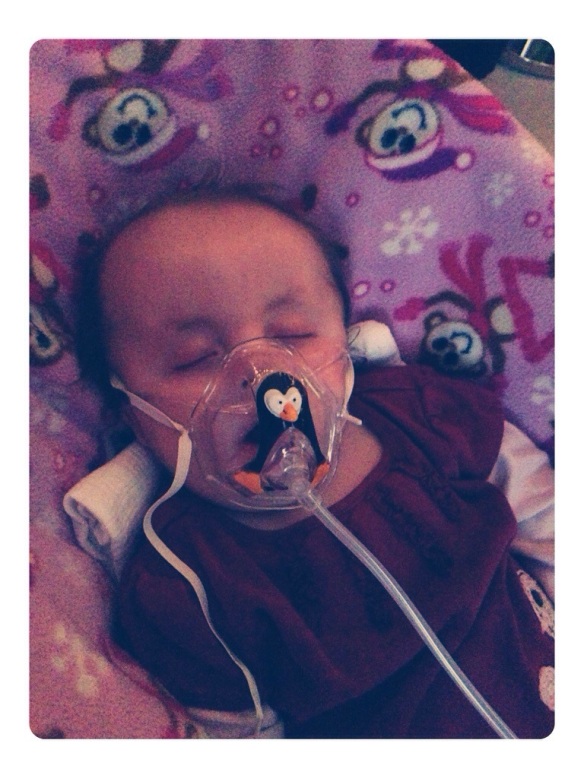 Despite the boogies she’s a happy girl! 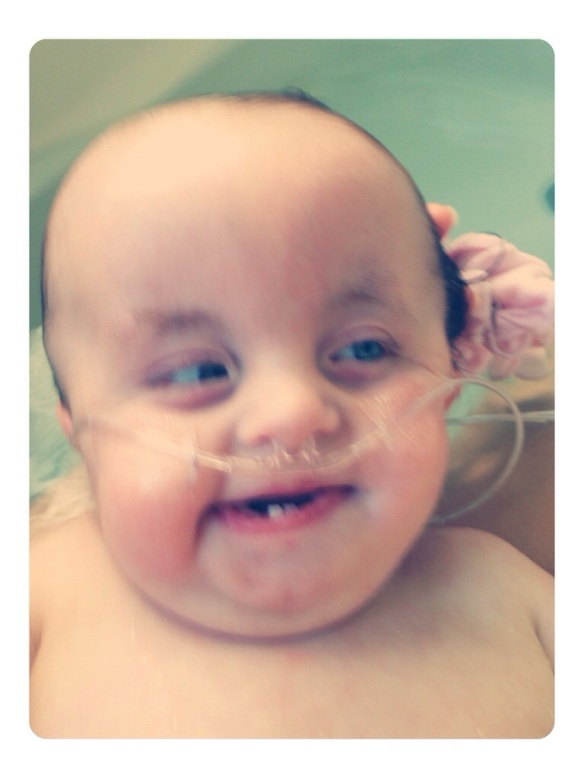 Reflection of the sunset over the woods. This is the view from my prayer spot. 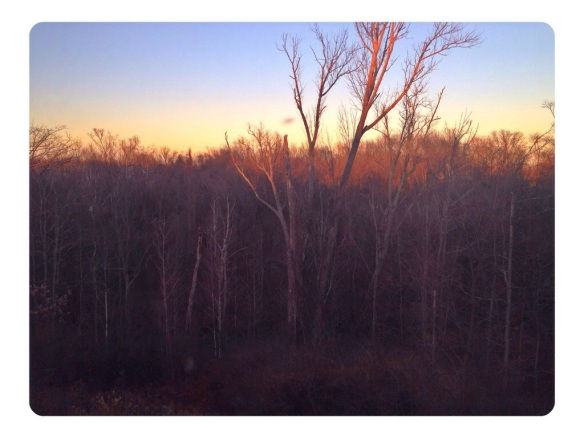 The gorgeous display of lights at the Creation Museum ~

Ask Gavin about his llamas. (Or alpacas as the case may be). Petting zoo at the Creation Museum ~

Her baffs are soooo relaxing ~ 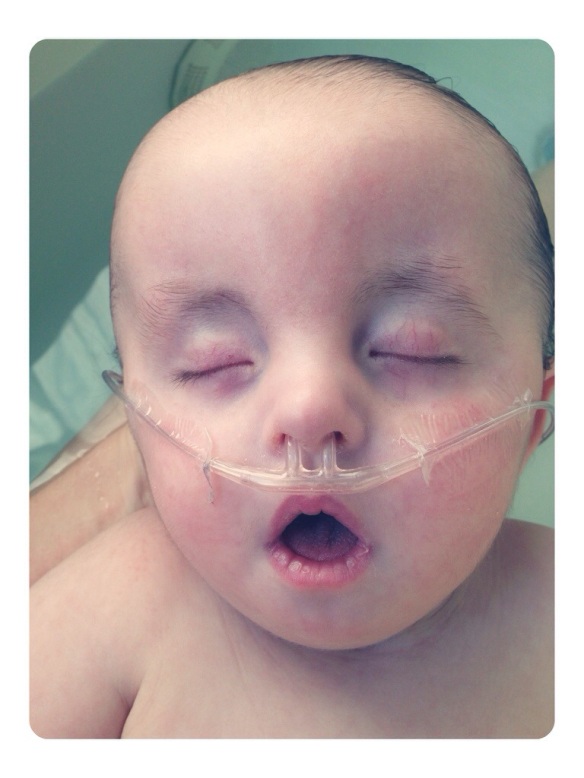 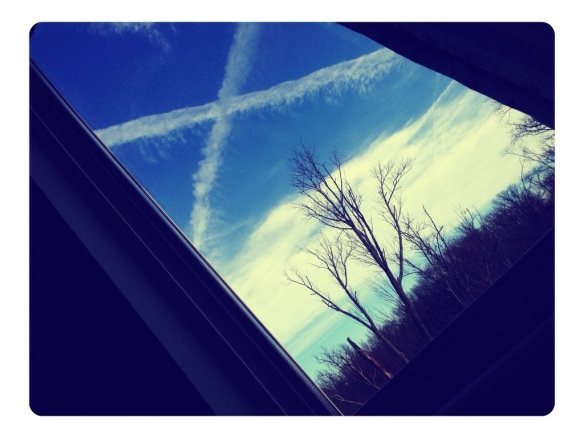 This is love: not that we loved God, but that he loved us and sent his Son as an atoning sacrifice for our sins. Dear friends, since God so loved us, we also ought to love one another. No one has ever seen God; but if we love one another, God lives in us and his love is made complete in us.
(1 John 4:10-12)

On Friday night Grampa Joe & Gramma Mary Lou (William’s Dad & Stepmom) arrived in town all the way from Connecticut! We had a great weekend with them and wished they could have stayed longer! The Big Kids got to go swimming in the hotel swimming pool and got to go shopping and to see a movie with their Grandparents! 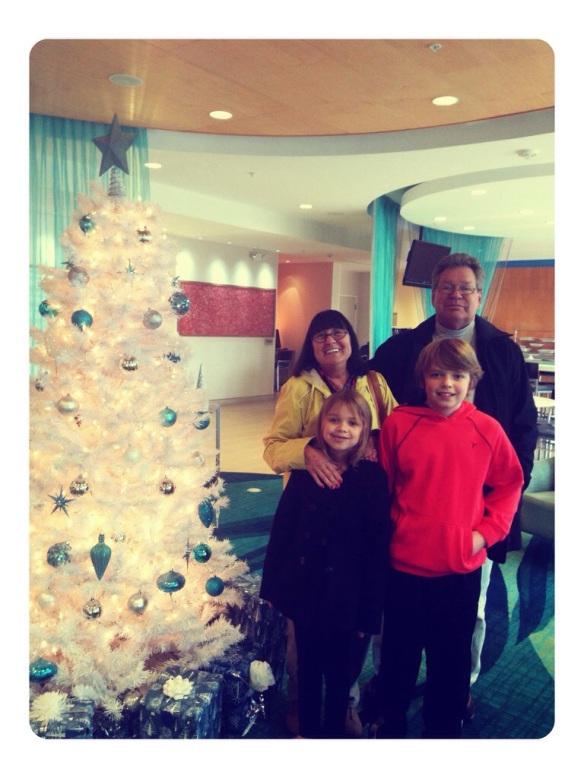 Saturday we had an early dinner at the Montgomery Inn Boathouse after William took us on a scenic tour of the city over and over again. 😉

Sunday we all went out to my sister and brother-in-law’s house to celebrate my niece Keira’s fourth birthday. We had a very nice time!

Three Generations of Yuskos (the senses of humor combined on this couch is almost scary!!!) ~

Hopefully Grampa Joe & Gramma Mary Lou will be back for another visit this summer! We had such a nice time together that I wasn’t thinking to get the camera out as often as I would have liked. I could kick myself for not getting a picture of them with Norns!!! I promise next time!

Nora celebrated a big win by the Bengals!! Who dey!!! 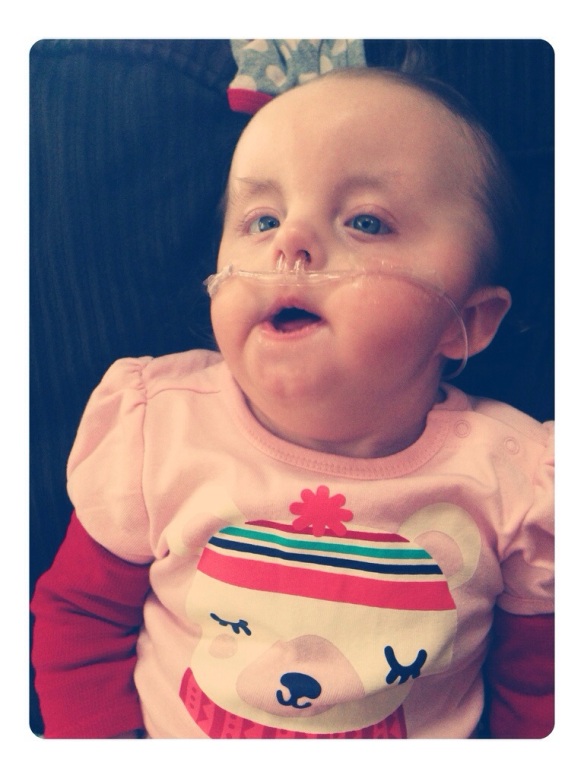 Sweet little Ivy is still up at Cincinnati Children’s hospital. I’ve been intending to visit for so long and finally got the opportunity to go and do it! As you can see, Ivy looks fabulous and seems to be doing really well! She is even more adorable in person!

It was such a pleasure to hang out with Ivy’s Mom, Robin as well. There aren’t too many of us T18 moms out there! We’re a special breed, I guess! 😉

Last baff of the year while the rest of the family went to see Frozen. 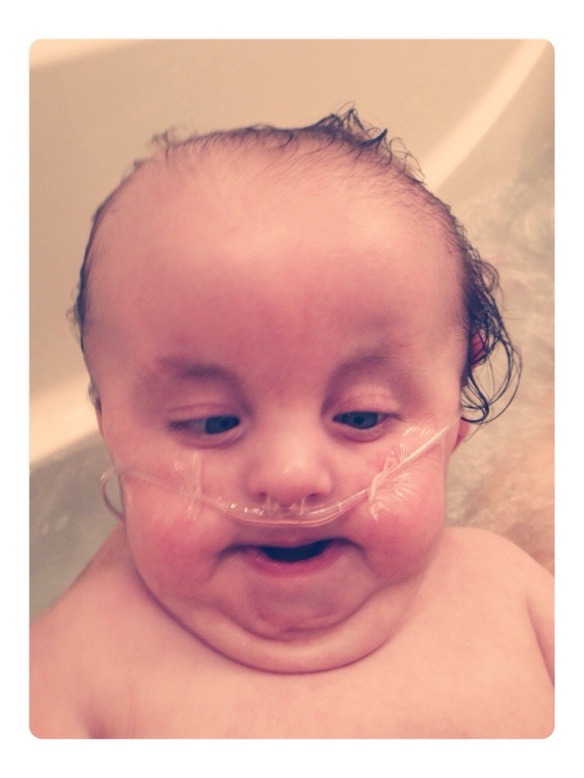 While they were out they got recognized by one of Nora’s fans! Hi, Jamie!!! 💖 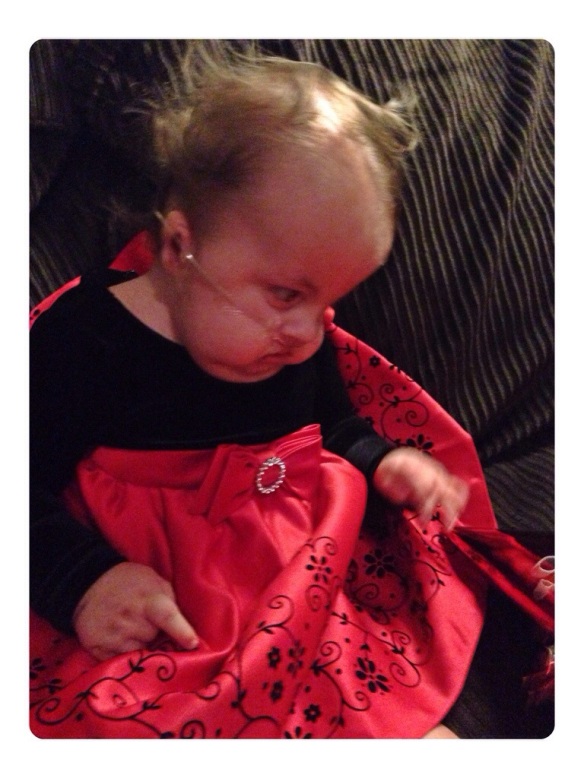 What a sweet way to start off a brand new year ~

Let them give thanks to the Lord for his unfailing love and his wonderful deeds for mankind.
(Psalm 107:15)