Nora and I had the day to ourselves as William and Gavin and Greta spent the day at King’s Island with Sophie! It sounds and looks like they had a ton of fun!

While I wish I could have joined them, it was nice to catch up on some sleep while Nora napped. I was also the recipient of some pretty sweet smiles (and mood swings).

I smile one second... 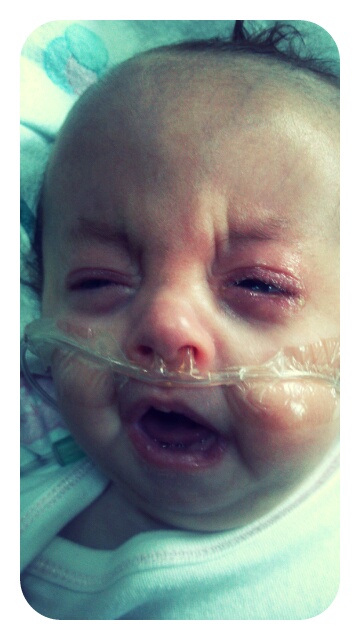 Later in the evening I was afforded the privilege of getting out of the house to attend the Open House at Gavin and Greta’s new school. Gavin and Greta have once again ended up with great teachers! Thank you so very much, Matt S. for coming to stay with Nora so I could do that! You’re awesome!

Recently I was recalling an instance that will forever remain etched in my memory. I remembered how the hairs stood up on my arms and the tears spilled down my cheeks when it happened. It was one of the first and most incredible God hugs I have ever had (or bothered to notice). I guess this one was so blatant and so bold that there was no missing it. It was December of 1994. A dear friend of mine had recently passed away. His name was Jon. We were in an art class together in college and had struck up a friendship over each of our adoption stories. Jon was adopted from Korea and shared with me his perspective on being an adoptee. Having recently become a birth mother, he lightened my heart by giving me the reassurance that I did indeed make the right decision. And perhaps my perspective as a birth mother gave him the comfort and reassurance that his own birth mother certainly must have loved him too. He was such a sweet friend and I still miss him and think about him all these years later. Shortly after his funeral I was back at work. I was walking downtown on my way back from lunch thinking about Jon and in a state of sadness over his passing. “If you really are in a better place, Jon, please, please send me some sort of sign,” I pleaded. Instantly, a man walked out in front of me from a parking garage. He was wearing a black satiny jacket with red embroidery on the back which read, “DON’T WORRY, BE HAPPY!” Speechless!!

Saturday at the Cheesecake Factory, Sarah happened to notice the wording at the bottom of our receipts.

You’d expect it to say, “Eat more cheesecake.” or something? But instead, “Don’t worry, be happy!” And that Sarah noticed it and pointed it out to me, as if though it were somehow personally meant for me.

This evening at the Open House… I was walking into the building past the celebratory ice cream truck parked out front. Of course you know the song that was dancing from its speakers….

I know that there is nothing better for people than to be happy and to do good while they live. (Ecclesiastes 3:12 NIV)

8 thoughts on “Be Happy”