Now we’re down to 5 more days. God’s peace that surpasses all understanding is fully upon me! 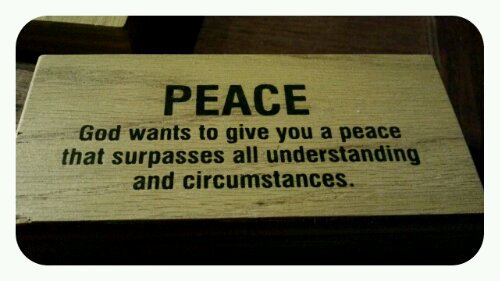 It’s been a good past couple of days. I managed to muster up the strength and courage that God armed me with today to get up and speak on stage to a large group of women at my Bible study. I shared a bit about what I’m going through as it pertains to Nora. I actually got through my speech without breaking down into hyperventilated snot-crying! I think I did okay and managed to remember most of what I wanted to share.  While I was greatly honored to be asked to share my story, I do have to say I’m relieved that’s over with!  🙂

Yesterday I went to a healing touch session which is an energy-based practice that promotes healing from a Christian perspective. (see http://www.HTSpiritualMinistry.com) It also involves the laying on of hands and the use of oils. A couple of days ago I was overwhelmed and in tears with all of the appointments, obligations, and loose ends on my plate, the never ending list. This was on top of a restless night’s sleep; basically, I was just tired and crabby. I had never gone to anything like this before and for a brief second considered canceling. I’m so so glad I didn’t cancel. It was so very worth my time! It was about 2 hours that I spent there. The first hour and a half was spent in a restful meditative state reclined on a massage table. The Healing Practitioner, Susan started off by praying over me and Nora out loud. The rest of the time she prayed silently over me and focused on different energy points. It was very relaxing. Prior to the session, she suggested I keep a mental note of any imagery that came to mind. She paused intermittently to write down any thoughts or imagery she herself experienced at each energy point.

Afterward we discussed each of our experiences. I was brought to tears with everything Susan had to share with me. She mentioned that she had visualized the Christ figure with his arms outstretched. She specifically mentioned that it was a figure similar a statue in South America (http://www.brazil-consulate.org/images/Rio-Jesus1.jpg) She also noted the presence of a strong male figure with a halo who was very involved in my circumstances. It took me a moment, but who other than Fr. Joseph Cappel???!!! My now deceased relative (my grandmother’s first cousin), a Maryknoll priest who served as a missionary in South America for over 60 years. (See DAY 33 of my blog for further information and an explanation of the halo!) Susan also mentioned the presence of a female figure surrounded by light that appeared to her twice throughout the session. This woman had lived a holy life here on earth; possibly a deceased relative. She is walking through this every step of the way with me. I immediately thought of my grandmother who suffered the loss of an infant during her lifetime. This seemed to be further confirmed when Susan made mention of seeing an antique baby buggy. There is a story about my grandmother involving a baby buggy, her baby sister, a steep hill and failed buggy brakes. Fortunately, that story had a happy ending and everyone was okay! That story stands out in my mind, which is why I assimilate the image of the baby buggy with my grandmother. It’s comforting, reassuring and empowering to know that there are definitely spiritual forces involved, very special spiritual forces joined by a battalion of angels, saints and loved ones. To have their presence confirmed is nothing short of amazing.

There were other things discussed as well, but I will write more about those later.

I’m so thankful for everyone who has been praying for us and lavishing us with love and support. Your prayers are certainly being felt in incredible ways!